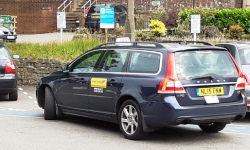 While a Taxi Driver can collect a fare in the street, on a taxi rank, or be flagged down, a Licensed Private Hire driver can only be pre-booked. This is an acceptable arrangement when adhered to - and damaging to a taxi-drivers livelihood when it is flouted. The penalties for breaking the law can be severe: Gloucester Police, for example, seized seven vehicles in one operation running over a Friday and Saturday night. In some parts of the country, as in Gloucester, Police and Trading Standards take action. Unfortunately, in many areas the local authorities don't

In one such area the local Taxi (Hackney) Association sought our help. Having repeatedly complained to the local council, who failed to take action, the Association discussed the matter with us and on a Friday night we put a testing plan into operation. Two of our competent and trained young private investigators, dressed for a Friday night out and having swigged and spat out alcohol to 'smell' the part set about approaching the many private licensed drivers in the town between 11pm and 3am

The rule - again - is simple: private licensed drivers cannot take anything other than pre-booked fares. Aside from some approached who were waiting for (booked) fares every single driver approached accepted the fare and transported them. As our Investigators were working, they were covered by our insurance; had they not been they would have been uninsured, in an uninsured vehicle

The journeys were audio recorded, and drivers discreelty photgraphed; index numbers and plate numbers were noted down, together with times of journey. The results were discussed with the local council licensing officer, including the action of one driver who was not tested - because, after he was seen driving the wrong way down a one way street at speed we judged it unreasonably dangerous for anyone to get in his car

If you represent a taxi association with a similar problem, get in touch with us and we will help not only with appropriate testing, but with representing the matter to your local council and bringing the matter to the attention of the media, important if you are trying to highlight the issue