See text of Article below 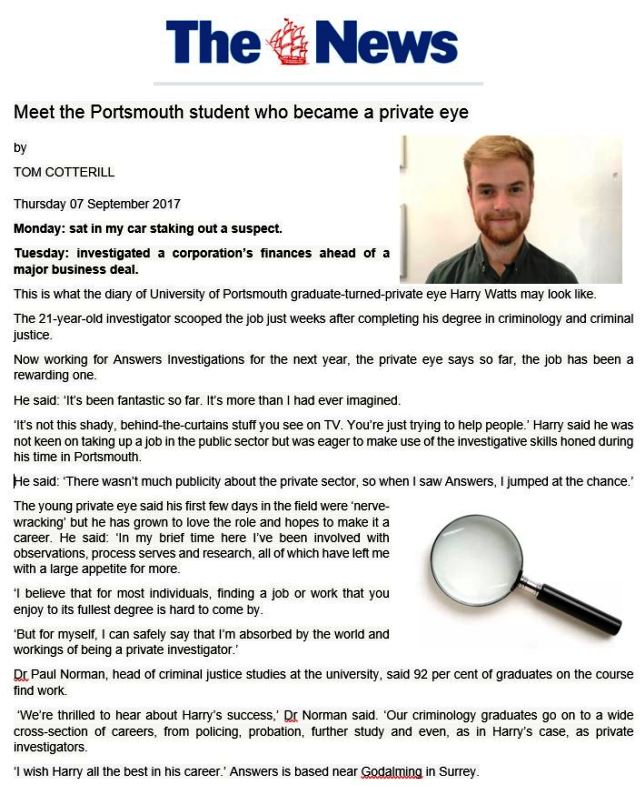 Meet the Portsmouth student who became a private eye

Monday: sat in my car staking out a suspect.

Tuesday: investigated a corporation’s finances ahead of a major business deal.

Now working for Answers Investigations for the next year, the private eye says so far, the job has been a rewarding one

He said: ‘It’s been fantastic so far. It’s more than I had ever imagined

‘It’s not this shady, behind-the-curtains stuff you see on TV. You’re just trying to help people.’ Harry said he was not keen on taking up a job in the public sector but was eager to make use of the investigative skills honed during his time in Portsmouth

He said: ‘There wasn’t much publicity about the private sector, so when I saw Answers, I jumped at the chance.’

The young private eye said his first few days in the field were ‘nerve-wracking’ but he has grown to love the role and hopes to make it a career. He said: ‘In my brief time here I’ve been involved with observations, process serves and research, all of which have left me with a large appetite for more

‘I believe that for most individuals, finding a job or work that you enjoy to its fullest degree is hard to come by

‘But for myself, I can safely say that I’m absorbed by the world and workings of being a private investigator.

Dr Paul Norman, head of criminal justice studies at the university, said 92 per cent of graduates on the course find work

‘We’re thrilled to hear about Harry’s success,’ Dr Norman said. ‘Our criminology graduates go on to a wide cross-section of careers, from policing, probation, further study and even, as in Harry’s case, as private investigators

‘I wish Harry all the best in his career.’ Answers is based near Godalming in Surrey 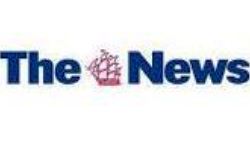 News features about Harry's placement and career, and of many other Answers Investigators can be seen on our press pages 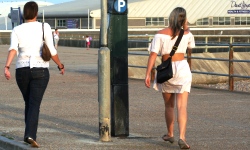 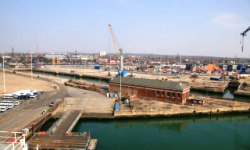 Private Investigator in Southampton and Hampshire for corporate, legal and personal clients & issues 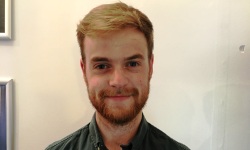