Profile of one of our 'younger set' providing a unique take on private investigation. Almost above suspicion, Lise's skills are effective, experienced and professional 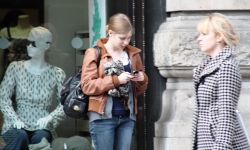 Lise started working with us when just 16 years old. Since then she has constantly been involved with Answers both full-time and part-time, mixing work with studies. Do not be deceived by her appearance - under her young looking exterior lies an intelligent and resourceful young Private Eye who has been jointly responsible for some major coups over the years, to the benefit of our clients and to the detriment of those who have tried to defraud them

" I know what people think when they look at me. I am under 5 feet tall and very slight and I know that people who don't know me probably think I'm studying GCSE or something. I go through life with my ID welded to my forehead because no-one believes I am old enough to drink, let alone drive. It has it's advantages, though - one of them is working undercover and trust me, if I want to adopt the role of a 14 year old in order to blend into the background I can, and you would have no idea you were dealing with a Private Detective. Downsides? - I keep a good sense of humour in order to cope with the constant mickey taking at work; if someone to needs a "young niece" in a situation it seems to be me that gets picked"

"For example, a while ago one of our Private Investigators needed to get information out of a company, straight from the company's boss and in a way in which he wouldn't suspect he was really talking to a Private Detective. My colleague set up the cover of a catering organisation and went to visit the target - I went with him under the guise of being his niece who was helping him out for the day - a natural thing and a naturally created situation. The man was suspected of stealing information from his previous employer. Little did he know that while he was talking to my "uncle" I was secretly filiming his office and recording the conversation - he mentally dismissed me as a "nothing" which left me free to get on with it"

"The irony of that situation was that at the same time the target started boasting to my colleague about how he had taken information from his previous employer - unbelieveable. The whole lot, of course, was going down on a digital recorder and the evidence was presented in the High Court with the result that our client won their case, our target being ordered to close down his company, pay compensation and be banned from working in the industry for a year. The case was reported heavily in the employment industry trade press"

"In another case we needed to get information from someone about how long they had lived somewhere, what cars they owned etc. It was thought that he had lied when declaring this information 'officially'. Marnie and I called at the guy's house, looking like college kids, and asked him to do a survey. We told no lies, but in amongst our 25 or so survey questions were 6 or 7 that were the real ones. It is straightforward - he wanted to boast, a human weakness, and he did, telling us the truth as opposed to the apparent untruths on what he had declared. As a result he was ordered to return more than £70,000 that he had misappropriated, all because he saw us as above suspicion"

"It is inevitable that I am used extensively for our underage ID checking programme under Think 21 and Challenge 21. We work for pub chains and retailers testing out their Challenge 25 and Challenge 21 policies to see if they are up to speed. On one occasion, our client had asked us if, while trying to buy alcohol, we would also buy painkillers to see if their EPOS system flagged that up too. In one of their shops I picked up a packet of aspirin as well as a bottle of wine and took it to the counter; the till duly flagged up the age verification for the painkillers. We didn't get as far as the alcohol - the woman behind the counter wouldn't sell me the aspirin because she thought I didn't look 12 years old!"

"There was an awful twist to that story. I was naturally pretty indignant about it but had to keep that to myself in the shop to keep the cover up; different when I got to our manager's car outside when I vented my disgust at someone not believeing I was 12 years old. Unfortunately I had forgotten I was wearing a hidden audio microphone and my ranting was recorded. I work with people who have a bad sense of humour and very often they find it funny to replay it, again and again. The real irony is that on that same afternoon we tested a pub owned by the same people and they cheerfully pushed a vodka and coke across the bar to me without batting an eyelid, dressed the same as I had been in their shop!"