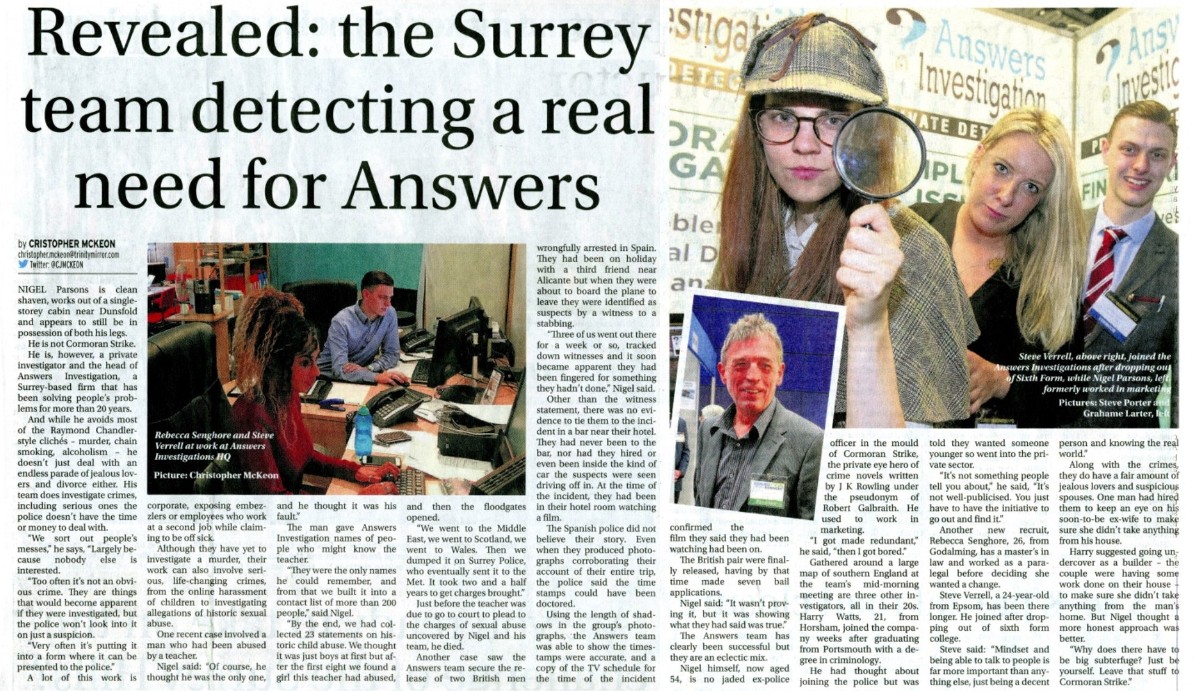 Nigel Parsons is clean shaven, works out of a single-storey building near Dunsfold appears to still be in possession of both his legs

He is not Cormoran Strike

He is, however, a private investigator and the head of Answers Investigation, a Surrey-based firm that has been solving people's problems for more than 20 years

And while he avoids most of the Raymond Chandler stereotypes - murder, chain smoking, alcoholism - he doesn't just deal with an endless parade of jealous lovers and divorce either. His team does investigate crimes, including serious ones the police doesn't have the time or money to deal with

"We sort out people's messes," he says, "Largely because nobody else is interested"

"Too often it's not an obvious crime. They are things that would become apparent if they were investigated, but the police won't look into it on just a suspicion"

"Very often it's putting it into a form where it can be presented to the police."

A lot of this work is corporate, exposing embezzlers or employees who work at a second job while claiming to be off sick

Although they have yet to investigate a murder, their work can also involve serious, life-destroying crimes, from children being subjected to online harassment to investigating allegations of historic sexual abuse

Nigel said: "Of course, he thought he was the only one, and he thought it was his fault."

"They were the only names he could remember, and from that we built it into a contact list of more than 200 people," said Nigel

"By the end, we had collected 23 statements on historic child abuse. We thought it was just boys at first but after the first eight we found a girl this teacher had abused, and then the floodgates opened

"We went to the Middle East, we went to Scotland, we went to Wales. Then we dumped it on Surrey Police, who eventually sent it to the Met. It took two and a half years to get charges brought."

Just before the teacher was due to go to court to plead to the charges of sexual abuse uncovered by Nigel and his team, he died

Another case saw the Answers team secure the release of two British men wrongfully arrested in Spain. They had been on holiday with a third friend near Alicante but when they were about to board the plane to leave they were identified as suspects by a witness to a stabbing

"Three of us went out there for a week or so, tracked down witnesses and it soon became apparent they had been fingered for something they hadn't done," Nigel said

Other than the witness statement, there was no evidence to tie them to the incident in a bar near their hotel. They had never been to the bar, nor had they hired or even been inside the kind of car the suspects were seen driving off in. At the time of the incident, they had been in their hotel room watching a film

The Spanish police did not believe their story. Even when they produced photographs corroborating their account of their entire trip, the police said the time stamps could have been doctored

Using the length of shadows in the group's photographs, the Answers team was able to show the timestamps were accurate, and a copy of the TV schedule for the time of the incident confirmed the film they said they had been watching had been on

The British pair were finally released, having by that time made seven bail applications

Nigel said: "It wasn't proving it, but it was showing what they had said was true."

Nigel himself, now aged 54, is no jaded ex-police officer in the mould of Cormoran Strike. He used to work in marketing

Gathered around a large map of southern England at the team's mid-morning meeting are three other investigators, all in their 20s. Harry Watts, 21, from Horsham, joined the company weeks after graduating from Portsmouth with a degree in criminology

"It's not something people tell you about," he said, "It's not well-publicised

"You just have to have the initiative to go out and find it."

Another new recruit, Rebecca Senghore, 26, from Godalming, has a master's in law and worked as a paralegal before deciding she wanted a change. Steve Verrell, a 24-year-old from Epsom, has been there longer. He joined after dropping out of sixth form college

Steve said: "Mindset and being able to talk to people is far more important than anything else, just being a decent person and knowing the real world."

Along with the crimes, they do have a fair amount of jealous lovers and suspicious spouses. One man had hired them to keep an eye on his soon-to-be ex-wife to make sure she didn't take anything from his house

But Nigel thought a more honest approach was better

"Why does there have to be big subterfuge? Just be yourself"

"Leave that stuff to Cormoran Strike." 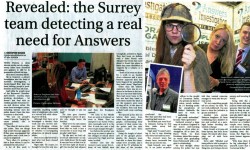 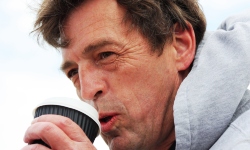 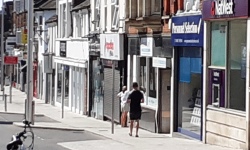